The Queen and I

The Rigellian Queen is a limited time decoration released during the Treehouse of Horror XXV Event.

It was later re-released as a premium item, available in the Treehouse of Horror XXVI Event and in the Deep Space Homer 2016 Event.

It returned on December 5, 2017 during The Invasion Before Christmas 2017 Event. It was featured in the Rigellian Queen Festive Facade Bundle. 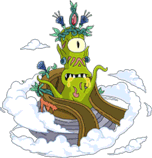 Add a photo to this gallery
Retrieved from "https://simpsonstappedout.fandom.com/wiki/Rigellian_Queen?oldid=209971"
Community content is available under CC-BY-SA unless otherwise noted.