Threatening Humans With Extinction at Christmas (after event)

After Balderdashing All the Way Pt. 13 is completed, the Rigellian Christmas Spaceship was destroyed for the rest of the event. After the event, it can be changed to its original version and destroyed version. 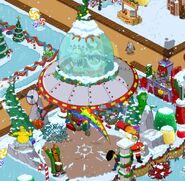 Rigellian Christmas Spaceship during B.S. Battles.
Add a photo to this gallery
Retrieved from "https://simpsonstappedout.fandom.com/wiki/Rigellian_Christmas_Spaceship?oldid=256313"
Community content is available under CC-BY-SA unless otherwise noted.