Rigel 7 (or Rigel VII) is a planet home to the Rigellians species, including Kang and Kodos. They speak Rigellian, which, by sheer coincidence, is identical to the English language. The other inhabitants of Rigel 7 seem to be similar in appearance to Kang and Kodos and include, amongst others, Serak the Preparer, and presumably Mr. Sulu, the submarine operator of the U.S.S. Jebediah. 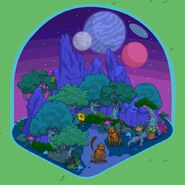 Rigel VII in the game.
Community content is available under CC-BY-SA unless otherwise noted.