Richard Nixon is a limited-time premium character which was available from June 30, 2015, until July 9, 2015, as a Gil Deal during the 4th July 2015 Event. He is unlocked upon completion of the Scandal-Gate Hotel.

Richard Nixon was a former President of the United States. After his tenure as President, he spent some time in Springfield.

*If the player does not have the Police Station, then the task will happen at the Scandal-Gate Hotel instead. 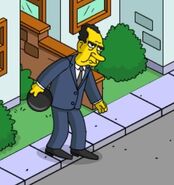 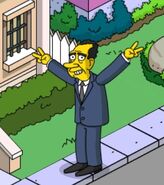 Richard Nixon waving to the people.
Add a photo to this gallery
Retrieved from "https://simpsonstappedout.fandom.com/wiki/Richard_Nixon?oldid=257192"
Community content is available under CC-BY-SA unless otherwise noted.