Rex Banner is a limited-time character released on June 28, 2013, alongside the 4th July 2013 Event. He is unlocked upon completion of the Nighthawk Diner.

He was re-released as a premium character for the 4th July 2014 Event, and so far, he has been re-released for all subsequent 4th July Events.

Rex Banner is a U.S. Treasury officer in Washington, D.C. briefly sent to Springfield to uphold Prohibition, and to replace Clancy Wiggum as Chief of Police. 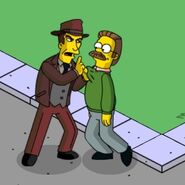 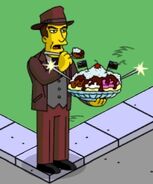 Rex Banner in the show
Add a photo to this gallery
Retrieved from "https://simpsonstappedout.fandom.com/wiki/Rex_Banner?oldid=252881"
Community content is available under CC-BY-SA unless otherwise noted.