The Simpsons: Tapped Out Wiki
Register
Don't have an account?
Sign In
Advertisement
in: Characters, Churchy Joes, Level 14,
and 11 more

Reverend Timothy Lovejoy is a character in the Churchy Joes character collection. He is unlocked upon the completion of the First Church of Springfield, which is unlocked by the quest The Passion of the Flanders Pt. 1 in level 14.

Reverend Timothy Lovejoy, Jr., also known as Rev. Lovejoy, is the local Baptist Minister in Springfield. Rev. Lovejoy is sometimes seen with a Catholic Priest's cassock. He is a Man of God and a marriage counselor. It is revealed that he may be friends with Rabbi Hyman Krustofsky because they do a radio show together about religion called Gabbin' about God. His biggest competitors are the NFL, warm beds on a Sunday morning, and cable.

He describes how he initially came to Springfield an eager, idealistic young man in the seventies, only to become cynical and disillusioned about his flock and ministry, mostly due to Ned Flanders, who constantly pesters him with such non-emergencies as coveting his own wife. Lovejoy would dispatch such concerns with maximum brevity so that he could return to playing with his model trains (his true passion), and in one case, his dessert. He wrote a book called Hell: It's Not Just for Christians Anymore and a pamphlet called Satan's Boners. 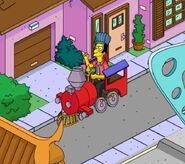 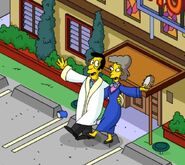