Referee Homer is a limited time costume for Homer Simpson released on June 23, 2015, during the Tap Ball 2015 Event. It was unlocked progressing through the Meet My Trophy Life questline.

There are two episodes which the costume is based on.

You Don't Have to Live Like a Referee[edit | edit source]

After a speech about her hero Homer, Lisa wins over the crowd. As Homer basks in the glory of heroism, it turns out that Homer's not the only one noticing his heroism as the video of the speech went viral, and soon he is called to referee for the World Cup in Brazil.

Homer referees Lisa's soccer game and his subpar skills frustrate Lisa. Then, stung by her criticism, he learns the rules of soccer and becomes a better referee, impressing Lisa. However, Homer gives her a yellow card after Ronaldo points out that she is a "flopper", then a red card for bad sportsmanship when she rips the yellow card, causing her to be ejected from the game. 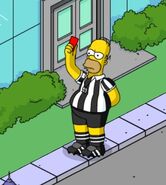 Referee Homer in "Marge Gamer"
Add a photo to this gallery
Retrieved from "https://simpsonstappedout.fandom.com/wiki/Referee_Homer?oldid=253763"
Community content is available under CC-BY-SA unless otherwise noted.