The Ray Gun was re-released for the Treehouse of Horror XXV Event. To unlock the Ray Gun for purchase, players had to first complete the Restricted Air Space quest. Upon purchasing and placing the Ray Gun, players could shoot Kodos down from the sky (as with the previous Halloween event), creating Kodos' Crashed UFO. The new Ray Gun that Professor Frink provides to players would produce one Ammo every eight hours. 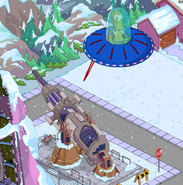 An odd glitch showing Kang attacking the Ray Gun during the Christmas Event.

Ray Gun next to the Crashed UFO
Add a photo to this gallery
Retrieved from "https://simpsonstappedout.fandom.com/wiki/Ray_Gun?oldid=131493"
Community content is available under CC-BY-SA unless otherwise noted.