Rappin' Bart is a limited-time costume for Bart that was released on August 29, 2017, as part of the Homerpalooza 2017 Event. It was the fourth prize to be won in the event's Act 3.

Bart sees a commercial for the rap show "Murder 4 Life" and plans to go, even though Lisa is disappointed that he has become "another lame suburban kid who loves rap". Homer has no qualms about letting Bart buy the ticket himself, as long as Bart doesn't block the TV. Later, when Marge sees Bart wearing ghetto-like clothing, she finds out about the hip-hop show and, along with Homer, cuts a rap forbidding him from going. However, Bart feels that since he bought his own ticket, he is an adult and plans to go to the show. 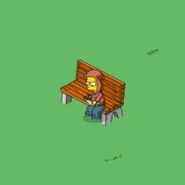 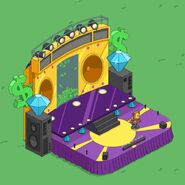 Rappin' Bart Rapping.
Add a photo to this gallery
Retrieved from "https://simpsonstappedout.fandom.com/wiki/Rappin%27_Bart?oldid=253472"
Community content is available under CC-BY-SA unless otherwise noted.