Truth, Justice, and the Milhouse Way

Radioactive Milhouse is a premium limited time costume for Milhouse released on October 6, 2015, during the Treehouse of Horror XXVI Event.

He returned on October 26, 2018 during the Treehouse of Horror XXIX Event as a possible prize in the Mystery Jack-O-Lantern.

Milhouse gets a Radioactive Man costume for his birthday and indulges in a brief flight of fancy. However, the reality falls far short. 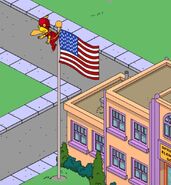 Radioactive Milhouse being a Hero.
Add a photo to this gallery
Retrieved from "https://simpsonstappedout.fandom.com/wiki/Radioactive_Milhouse?oldid=235651"
Community content is available under CC-BY-SA unless otherwise noted.