The Radioactive Man Statue was a limited time building used for issue 4 of the Superheroes 2015 event. It costs 1000 cash. You can send Pie Man, Clownface, Fruit Bat Man, Fallout Boy, Plopper, The Collector and Bartman to attack it. Moog, Sidekick Milhouse, Stupid Sexy Flanders and Ice Princess Martin can also attack it, but for them it is a non-visual job.

After completing the event, the statue has a total of seven different façades, depicting the statue in various states of destruction during the final part of the event.

Also, after the event, a new 10-hour task, Train for Future Conflict is available for Pie Man, Bartman, Plopper, The Collector, Fruit-Bat-Man and Clownface. This is an animated task similar to the fights against the statue. 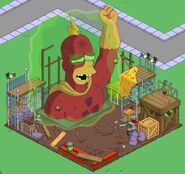 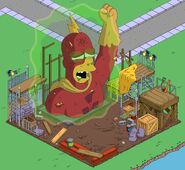 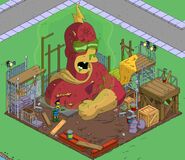 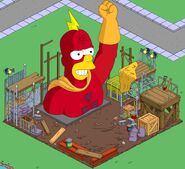 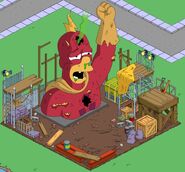 Radioactive Man statue in poor condition.
Add a photo to this gallery
Retrieved from "https://simpsonstappedout.fandom.com/wiki/Radioactive_Man_Statue?oldid=186996"
Community content is available under CC-BY-SA unless otherwise noted.