The End of the Beginning Pt. 20

The R.O.S.A is a character first released on January 2, 2016, along with the Winter 2015 Event. It was earned by completing most of Act 3's main questline, The End of the Beginning. After the event, she remained as a permanent character, unlocked during the same questline.

R.O.S.A (acronym for Robotic Offspring-Sitting Automaton) is a character exclusive to Tapped Out and a main part of The End of the Beginning questline. She is a robot created by Mr. Burns to supervise the babies' work at the Nuclear Plant, but her batteries were substituted by Fuel Rods when Baby Gerald got angry at her causing the explosion that destroyed the town (and supposed to be Homer's fault). 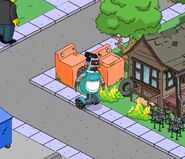 R.O.S.A as it appears in-game.

R.O.S.A in the Town Census, despite being a jobless character.
Add a photo to this gallery
Retrieved from "https://simpsonstappedout.fandom.com/wiki/R.O.S.A?oldid=251888"
Community content is available under CC-BY-SA unless otherwise noted.