We're Not in Equalia Anymore

Queen Helvetica is a limited time premium costume for Lisa Simpson that was released on January 15, 2015 as part of a deal from Gil.

Queen Helvetica is a queen of Equalia, together with Queen Valedictoria (Juliet Hobbes). She is inspired from Lisa Simpson. Lisa and Juliet Hobbes wrote a book about their fantasies, 'The Tales of Equalia'. In the story, the two queens discovered a special Two-nicorn and hid him from Homeroni. They were later attacked by two trolls (inspired from Jimbo and Dolph), but Dragon Kearney saved them. 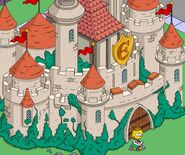 Queen Helvetica in the show
Add a photo to this gallery
Retrieved from "https://simpsonstappedout.fandom.com/wiki/Queen_Helvetica?oldid=241687"
Community content is available under CC-BY-SA unless otherwise noted.