Pyro is a limited-time character that was released on January 23, 2018, as part of Act 1 of the Bart Royale 2018 Event. He is the sixth and final personal prize to be won in the event's Act 1.

Chase, also known as Pyro, is an American Gladiator jerk and a parody of the real-life Gladiator Nitro. He dated Luann after she divorced Kirk. Their relationship ends when she's caught cheating on him with his best friend Gyro. 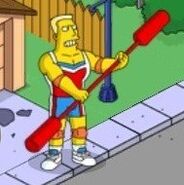 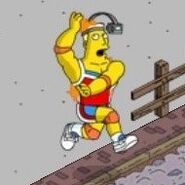 Pyro performing stunts.
Add a photo to this gallery
Retrieved from "https://simpsonstappedout.fandom.com/wiki/Pyro?oldid=245725"
Community content is available under CC-BY-SA unless otherwise noted.