Puritan Flanders is a costume released during the Thanksgiving 2014 Event. He is unlocked for free at the beginning of the event and is required to complete The Battle of Thanksgiving quest.

He was re-released as a premium costume for the Thanksgiving 2015 Event alone for 40 Donuts, or for 80 Donuts in the Thanksgiving Outfit Bundle together with Sacagawea Lisa, if the player had neither costumes. 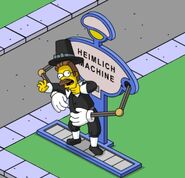 Puritan Flanders using the Heimlich Machine.
Add a photo to this gallery
Retrieved from "https://simpsonstappedout.fandom.com/wiki/Puritan_Flanders?oldid=240332"
Community content is available under CC-BY-SA unless otherwise noted.