1 (during the THoH XXV Event)

It reappeared on October 7, 2014, during the Treehouse of Horror XXV Event as one of the craftable objects. After obtaining the Grand Pumpkin, it could be crafted multiple times in the Make-a-Thing Workshop, but the items needed increased by 10% each time.

It returned on October 19, 2017, during Act 2 of the Treehouse of Horror XXVIII Event.

The Pumpkin House in the show. 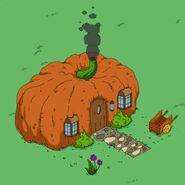 Pumpkin House's animation.
Add a photo to this gallery
Retrieved from "https://simpsonstappedout.fandom.com/wiki/Pumpkin_House?oldid=239383"
Community content is available under CC-BY-SA unless otherwise noted.