The Princess and the Pea-Brain

Princess Penelope is a character released for the Level 43 update on July 23, 2014. She is unlocked upon completion of Krusty's Giant Wheel in Krustyland. 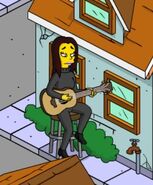 Princess Penelope getting married to Krusty.

Princess Penelope Smiling.
Add a photo to this gallery
Retrieved from "https://simpsonstappedout.fandom.com/wiki/Princess_Penelope?oldid=257141"
Community content is available under CC-BY-SA unless otherwise noted.