Princess Kashmir was added to the game files during an update on September 4, 2014, but was not released until November 12 with Level 47.

Princess Kashmir is first seen during Eugene Fisk's bachelor party. It is here that Homer gets his picture taken by Bart with his spy camera. The photo had far more effect on Homer than it did to Ms. Tifton. She is moved by Homer's speech to all the men in the audience about not treating women as objects, yet she still remains an exotic dancer to this day. 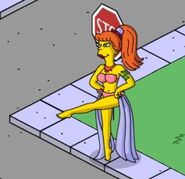 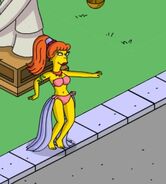 Princess Kashmir's unlock screen
Add a photo to this gallery
Retrieved from "https://simpsonstappedout.fandom.com/wiki/Princess_Kashmir?oldid=244673"
Community content is available under CC-BY-SA unless otherwise noted.