The Portal to Rigel 7 is a limited-time premium building first released during the Treehouse of Horror XXV Event where 6 Rigellians spawned every 8 hours. After the event, it earns at a premium rate.

It was re-released for the Treehouse of Horror XXVI Event, the Deep Space Homer 2016 Event, the SciFi 2016 Event and The Invasion Before Christmas 2017 Event, though for a smaller price than before. 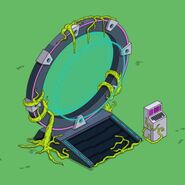 Portal to Rigel 7 in the game.
Add a photo to this gallery
Retrieved from "https://simpsonstappedout.fandom.com/wiki/Portal_to_Rigel_7?oldid=239576"
Community content is available under CC-BY-SA unless otherwise noted.