Recycling to the EXTREME!

Poochie is a limited-time character that was released on July 11, 2018, as part of the Poochie's Dog Dayz 2018 Event. Together with the Bicycle-Basketball Ramp, they were the third prize to be won in the event.

Poochie is a character on The Itchy & Scratchy Show. The network executives decided that the show needed an "update" to keep the interest of its audience, so they devised Poochie, a cartoon dog "with an attitude". Poochie has a song, the Poochie rap. The character proved to be unpopular with the audience, so he was killed off in a subsequent cartoon. Krusty and the Blue-Haired Lawyer appeared following the cartoon, assuring the audience that Poochie would never make another appearance.

* If the player does not have Poochie's Car, the task will not be visual and take place at the Brown House. 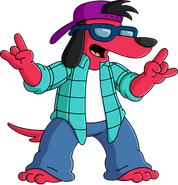 Poochie Dunking a Basketball at the Bicycle-Basketball Ramp.

Poochie Pretending to Be in a Car Chase.

Poochie in the show.

Poochie playing a guitar in the show.
Add a photo to this gallery
Retrieved from "https://simpsonstappedout.fandom.com/wiki/Poochie?oldid=256888"
Community content is available under CC-BY-SA unless otherwise noted.