This page is about the decoration. For the questline, see Police Tank (questline).

The Police Tank is a limited-time premium decoration that was released on January 13, 2016. as part of the Much Apu About Something Promotional.

It returned on January 23, 2018 during the Bart Royale 2018 Event in the Doomsday Mystery Box 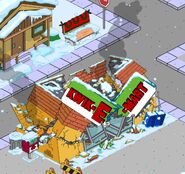 The Kwik-E-Mart after being demolished by Chief Wiggum.

Brown House destroyed by Police Tank.
Add a photo to this gallery
Retrieved from "https://simpsonstappedout.fandom.com/wiki/Police_Tank?oldid=246467"
Community content is available under CC-BY-SA unless otherwise noted.