Plague Rats are limited time popable characters which were added to the game with the Time Traveling Toaster 2017 Event. When a Plague Rats is tapped by the player, they will receive Eye Patches and Specimens. After the event, are unlockable as NPC in the Time Traveler's Bundle during the Pride 2017 Event. 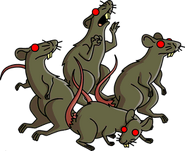 Plague Rats's unlock screen
Add a photo to this gallery
Retrieved from "https://simpsonstappedout.fandom.com/wiki/Plague_Rats?oldid=209357"
Community content is available under CC-BY-SA unless otherwise noted.