Pie Man is a limited-time costume for Homer that was released on February 18, 2015, as part of the Superheroes 2015 Event. He was unlocked for free upon completion of The Death of a Hero Pt. 1 quest.

He was re-released on June 14, 2016 for the Superheroes 2016 Event, unlocked for free upon start of the Prelude Pt. 2 quest. He returned again on September 12, 2018 during the Super Powers 2018 Event. He was a possible prize in the Mystery Box The Sequel.

Pie Man is a superhero alter ago of Homer Simpson. He invented the persona when The Rich Texan was taunting Lisa at the county fair. Homer had been previously warned by the police that he'd go to jail if he committed another assault, so he used a quilt as a cape and an empty pie tin with eye and mouth holes cut out for a disguise to avoid recognition. He then hit the Rich Texan in the face with a pie to humiliate him.

From that point on, Homer dressed up in costume as "Pie Man" and smashed pies in wrongdoers' faces. Chief Wiggum wanted to kill Pie Man. When Wiggum shot him, Lisa discovered that Pie Man was actually Homer. Later, Mr. Burns discovered it too and told Homer to smash pies on people Burns hated; otherwise Burns would reveal Pie Man's identity to the police. During a visit of the Dalai Lama, Homer revealed himself, but nobody believed him, except Marge. Bart later acted as his sidekick, as "Cupcake Kid". Pie Man appears in the opening sequence of The Blue and The Gray, along with Cupcake Kid. 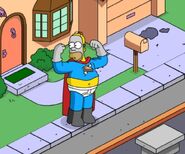 Pie Man training for future conflict.
Add a photo to this gallery
Retrieved from "https://simpsonstappedout.fandom.com/wiki/Pie_Man?oldid=234895"
Community content is available under CC-BY-SA unless otherwise noted.