The Art of Abe Simpson

Philip Hefflin is a limited-time character that was released on December 25, 2019, as part of Act 3 of Abe's in Toyland 2019 Event. He was the fifth and final prize to be won in the event's Act 3.

Philip Hefflin is gay artist who once worked as a photographer for Whiz-Bang Toy Company. After WWII he photographed veteran Abe Simpson as a model for plastic toy soldiers. They kissed during the photosession, Abe run away and Philip was fired. They meet later in Marfa, Texas. Abe spots his rainbow statue and stumbles into a gallery filled with paintings of him in his army uniform. They enjoy time together before Abe has to head back to Springfield. 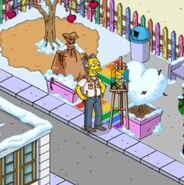 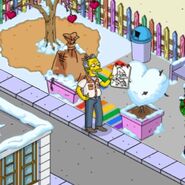 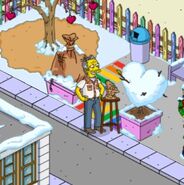 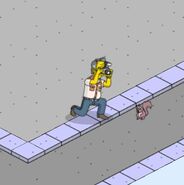 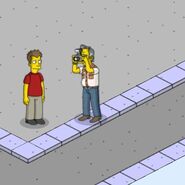 Young Philip Hefflin with Abe in the show.

Old Philip Hefflin with Abe in the show.
Add a photo to this gallery
Retrieved from "https://simpsonstappedout.fandom.com/wiki/Philip_Hefflin?oldid=242027"
Community content is available under CC-BY-SA unless otherwise noted.