Pharaoh Skinner is a limited-time costume for Skinner that was released on June 11, 2017, as part of the Time Traveling Toaster 2017 Event. He was unlocked with the Pharaoh Throne.

Lisa (as Miriam) and Milhouse (as Moses) command Skinner (as King Ramses II) to let their people go. After several failed plagues and an escape from a pyramid prison, they lead the Israelites to the shore, simultaneously flush all the Egyptians' toilets to drain the sea. After they have crossed the seabed, the water fills back up, washing away the pursuing Pharaoh and his guards. Moses asks Lisa if they will have an easy life from now on - she tells him that they will wander the desert for forty years. When he asks if it's plain sailing after that, she quickly changes the subject. 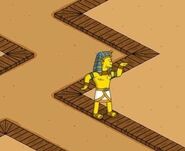 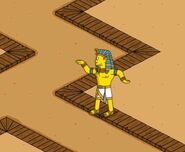 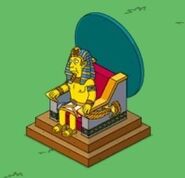 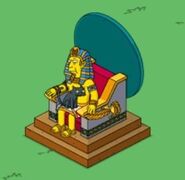 Pharaoh Skinner Ruling With an Iron Ankh (with cat).

Pharaoh Skinner in the show

Pharaoh Skinner doing the scarab in the show

Pharaoh Skinner Ruling With an Iron Ankh in the show
Add a photo to this gallery
Retrieved from "https://simpsonstappedout.fandom.com/wiki/Pharaoh_Skinner?oldid=242682"
Community content is available under CC-BY-SA unless otherwise noted.