Petroleus Rex is a limited-time premium character released on February 18, 2015, as part of the Superheroes 2015 Event. He is unlocked upon completion of the Tar Pits.

He was re-released on June 20, 2016, together with the Tar Pits during the Superheroes 2016 Event. He returned again on September 12, 2018 during the Super Powers 2018 Event. He was a possible prize in the Mystery Box The Sequel.

Petroleus Rex is a villain and a member of The Fossil Fuel Four. 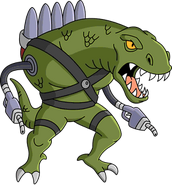 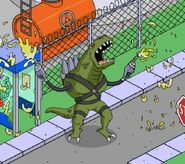 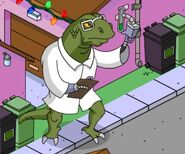 Petroleus Rex doing research.
Add a photo to this gallery
Retrieved from "https://simpsonstappedout.fandom.com/wiki/Petroleus_Rex?oldid=222236"
Community content is available under CC-BY-SA unless otherwise noted.