A Tale of Two Orphans

They returned as a rebate offer during The Invasion Before Christmas 2017 Event. It gave a bonus of 50 donuts after purchasing. They also received premium rates. They returned during the Moe's Ark 2018 Event, being a possible prize from the Zoo Gift Shop Mystery Box.

Patches and Poor Violet are a pair of sibling orphans who live in Springfield. They were abandoned by their mother when they were young. They had given their only $1 vitamin money to Bart, where he had carelessly used it. 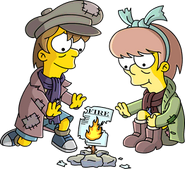 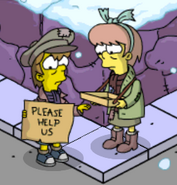 Patches and Poor Violet working hard for their money.
Add a photo to this gallery
Retrieved from "https://simpsonstappedout.fandom.com/wiki/Patches_and_Poor_Violet?oldid=221232"
Community content is available under CC-BY-SA unless otherwise noted.