Vanity: + ???
The Olmec Head is a decoration in The Simpsons: Tapped Out, and is given to the player for free when they reach level 1 in the Friend Points system.

Since its introduction, the head is seen outside the basement for the first time as an item for sale in the Simpsons' yard sale. The head is later seen outdoors again, this time as part of the wall between the two parts of Springfield. It then remains part of the attic in the Simpson House. How it ever got in the basement, out of the house, or up the attic remains unknown.

Olmec Head In the Show. 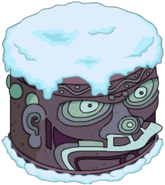 Olmec Head as it appears in game next to the Springfield Museum of Natural History.
Add a photo to this gallery
Retrieved from "https://simpsonstappedout.fandom.com/wiki/Olmec_Head?oldid=256150"
Community content is available under CC-BY-SA unless otherwise noted.