Need to Collect
or
Cost

The Old Simpson Farm is a limited time building released on April 14, 2015 during the Terwilligers 2015 Event. It was the fourth prize to be won in the Event's Act One.

It returned on August 7, 2019, as part of Act 1 of the Simpsons Babies 2019 Event. It was the second prize to be won in the event's Act 1. If the player already had it before the event they would be given 6 donuts instead.

The Old Simpson Farm is the farm Homer spent part of his early childhood at, raised mainly by his father Abe. The farm is off of Rural Route 9, outside of Springfield.

Homer often watched the Radiation King TV for hours on end, of which the TV had radiation that was activated for so long that what was originally Homer's shadow was literally burned into the floor and wall even several years after the fact.

However, Abe and Mona eventually were forced to allow the bank to foreclose the farmhouse in 1963 after the milk production went sour due to the cows being traumatized by Homer running around and shouting at them.

The farm now is a rundown ranch house with holes in the roof, and broken windows. The farmhouse has an empty living room, a room that has a fireplace, a bathroom, a TV with a radiation king sign, a kitchen and stairs. Upstairs are two bedrooms, one smaller, and one main bedroom. It has no basement. It has a barn too.

The Old Simpson Farm in the show 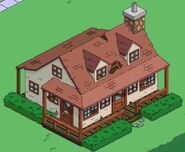 Old Simpson Farm in the game. 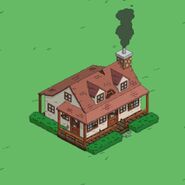 Old Simpson Farm's animation.
Add a photo to this gallery
Retrieved from "https://simpsonstappedout.fandom.com/wiki/Old_Simpson_Farm?oldid=238971"
Community content is available under CC-BY-SA unless otherwise noted.