A Congress of Devils

Old Scratch is a limited-time premium character that was released on October 14, 2020, as part of the Treehouse of Horror XXXI Event. He is unlocked upon the placement of Flanders' Personal Hell.

The Devil, also known as Satan, Lucifer and Old Scratch, is in charge of Hell. The Devil sometimes manifests as Ned Flanders but has often manifested in other forms, such as the Herman lookalike fawn in season 2. His manifestation in Ned Flanders is sometimes considered a separate character, Devil Flanders. 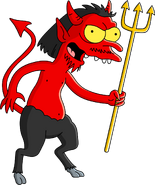 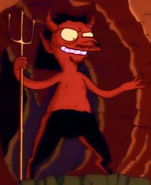 Old Scratch In the Show.
Add a photo to this gallery
Retrieved from "https://simpsonstappedout.fandom.com/wiki/Old_Scratch?oldid=256010"
Community content is available under CC-BY-SA unless otherwise noted.