The Simpsons: Tapped Out Wiki
Register
Don't have an account?
Sign In
Advertisement
in: Buildings, Public Buildings, Level 37,
and 2 more

Edit
watch 01:54
Arcane: League of Legends - The Loop
Do you like this video?
Play Sound

The Office of Unemployment is a building which was released with the Level 37 update in November 2013. It is unlocked during the Weekend Dad questline.

The Springfield Office of Unemployment manages benefits for Springfield's unemployed. Marge had to go here because of after her unsuccessful job working at a real estate agency. Larry Burns and Jimbo Jones were also seen here.

The Job Manager is a permanent feature that was released on September 24, 2015, shortly after the release of the Every Man's Dream Promotional. It is unlocked upon starting the Between Jobs questline and allows the player to simultaneously send all idle characters on the common task lengths 60m, 4h, 8h, 12h and 24h. Characters with a job needed for a quest will not be sent on a job.

The icon indicating that jobs can be assigned at the Office of Unemployment.

The icon indicating that jobs can be collected at the Office of Unemployment. 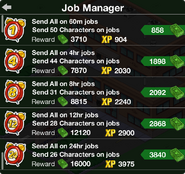