The Obstacle Wall is a limited-time decoration that was released on June 23, 2015, as part of the Tap Ball 2015 Event. It was the fourth prize to be won in the event's Act 1.

It was re-released on August 3, 2016 for the Springfield Games 2016 Event, offered as part of the Training Bundle, a premium purchase. 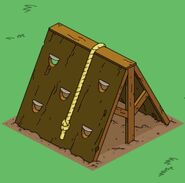 Add a photo to this gallery
Retrieved from "https://simpsonstappedout.fandom.com/wiki/Obstacle_Wall?oldid=211327"
Community content is available under CC-BY-SA unless otherwise noted.