Nightmares are four different types of NPC during the Treehouse of Horror XXVI Event in autumn 2015 that give event and crafting currency to get prizes once tapped. Those are "Zombies", "Snakes", "Bunnies", and "Skeletons." They appear on the streets of the Player's Springfield and their Neighbors' Springfields.

There are three different ways to collect rewards:

Nightmares appeared in four types. Each one rewarded one different type of crafting currency; those depended on which one of four youngsters were the last one sent to "Tell a Scary Story" on the Spooky Campfire. 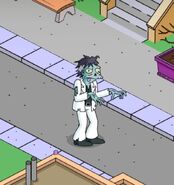 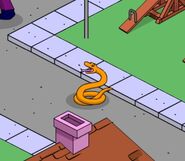 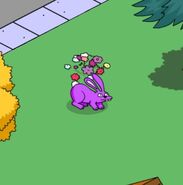 The Skeleton Nightmare.
Add a photo to this gallery
Retrieved from "https://simpsonstappedout.fandom.com/wiki/Nightmares?oldid=180061"
Community content is available under CC-BY-SA unless otherwise noted.