For for the original mystery box, see Mystery Box (discontinued).

The Mystery Box (initially called Revised Mystery Box) is a consumable introduced on April 1, 2015, which gives the player a random item. It replaces the Original Mystery Box and can be obtained by buying it for 6 Donuts in the store. It is also available as a reward from the Daily Challenges System.

The prizes from the Mystery Box were much better than the ones from the original Mystery Box. A list of all available items and the chances to win them is provided below. The presented chances may vary if the player already has some or all of the unique items (Blue Haired Lawyer, Kearney, Squeaky Voice Teen, the Lemon Tree and the Tire Fire).

For some of the prizes there is a short dialogue that appears when the item is unlocked through a Mystery Box. 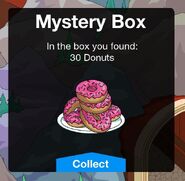