Mrs. Muntz is a Level 46 character in the Even More Oddballs character collection. She is unlocked upon completion of Classy Girls Strip Club.

Mrs. Muntz is Nelson's somewhat beautiful mother. Nelson receives his trademark laugh from her. Nelson would often mention his parents, and it was often implied that Mrs. Muntz doesn't care for him.

* If the player does has Otto, Easy A Pt.5 will be Meet Otto, otherwise, it will be Light Up.

Mrs. Muntz performing the dance of the bee. 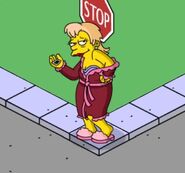 Mrs. Muntz outside the Simpson House.
Add a photo to this gallery
Retrieved from "https://simpsonstappedout.fandom.com/wiki/Mrs._Muntz?oldid=242410"
Community content is available under CC-BY-SA unless otherwise noted.