Mrs. Bouvier is a premium, limited time character released on November 20, 2014 during the Thanksgiving 2014 Event. She is unlocked upon completion of Piggly's Super Smorg.

Jacqueline Ingrid "Jackie" Bouvier (née Gurney) is the mother of Selma, Patty and Marge, the maternal grandmother of Bart, Hugo (non-canon), Lisa, and Maggie Simpson and Ling Bouvier, and the widow of the late Clancy Bouvier . She also had a sister named Gladys, who is now deceased. 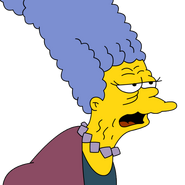 Add a photo to this gallery
Retrieved from "https://simpsonstappedout.fandom.com/wiki/Mrs._Bouvier?oldid=255635"
Community content is available under CC-BY-SA unless otherwise noted.