Mr. Teeny is a character released on September 5, 2014 with the Level 44 content update as the 11th Friend Points Prize.

Like Krusty, he is a heavy smoker, and often seems depressed off-stage. He was once seen playing Wii Sports with Krusty. He is sometimes seen as Krusty's driver, accountant, and butler. He's a classic act in Krusty's show when he does "monkey business". Mr. Teeny also rescues Krusty, when a brainwashed Bart, with a bomb attached to him, tries to kill himself and Krusty, Mr. Teeny snatches the bomb off Bart. 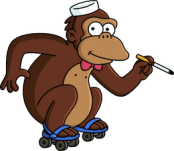 Mr Teeny In the Show.
Add a photo to this gallery
Retrieved from "https://simpsonstappedout.fandom.com/wiki/Mr._Teeny?oldid=254652"
Community content is available under CC-BY-SA unless otherwise noted.