This is about the costume. For the quest chain, see Mr. Plow (quest chain).

Mr Plow  is a recurring limited time outfit for Homer during the winter event in January 2013 and in Christmas 2013. The outfit cost 90 donuts during the winter event, and was available once the player reached level 5. Upon its re-release in 2013, it was no longer available to purchase for donuts, but was an initial prize on the minigame the Holiday Wheel.

It returned on November 29, 2017 during A Rigellian Christmas 2017 Promotion as a possible prize in the Winter Wonderland Mystery Box.

After Homer wrecks both of the family cars in a snowstorm, he buys a snowplow truck and uses it to start a business as "Mr. Plow", which proves to be surprisingly successful. Things go well for Homer until Barney starts his own snowplow business ("The Plow King"), competing with Homer, and steals all of Homer's customers...

Won in the Holiday Wheel 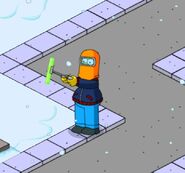 Mr. Plow eating the key to the city.
Add a photo to this gallery
Retrieved from "https://simpsonstappedout.fandom.com/wiki/Mr._Plow?oldid=252928"
Community content is available under CC-BY-SA unless otherwise noted.