The Simpson family was invited to Monsarno Research Campus where they learned more about GMOs. They meet there their chief scientist, Dr. Sideshow Bob. Lisa started after their visit working with Bob at the research campus. (Season 25, Episode 13: The Man Who Grew Too Much)

Similarly to the Castles during the Clash of Clones 2014 Event or the Elf Cannon during the Christmas 2014 Event, the Monsarno Research Campus had upgrades that could be applied to it. Each upgrade raised it one Level, and each Level added a new effect such as unlocking new jobs for specific groups, new items and increasing the rewards from Jobs.

Each upgrade could be bought with Fertilizer and Corn. As the Levels increased, the cost of each upgrade also increased. There were a total of 7 Levels that the player could upgrade during Act One. However, during Act Two & Three there was no more limit concerning the number of possible upgrades.

The Player, after completions of Act One's Questlines, was able to perform Random Tasks that regularly popped up to earn more of the event's currencies. Since the tasks were picked in the Unlocked Jobs, it was a way to increased player's Stock. Also, since they were randomly submitted, probability that the job was already started at the Monsarno Research were good. Same thing occurs after completion of Act Two & Three's Questlines.

In Act One, upgrading to Level 7 first unlock the ability for more characters to earn Fertilizer, Corn and Spades. A correct strategy would be to focus on upgrading and then work on getting the items for Crafting.

The Monsarno Research in the show 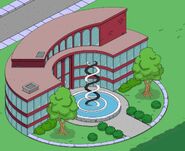 Act One leveling up completed, wait for Act Two

To access the Event Menu, click on the Knife Trophy in the bottom right of your screen
Add a photo to this gallery
Retrieved from "https://simpsonstappedout.fandom.com/wiki/Monsarno_Research?oldid=226467"
Community content is available under CC-BY-SA unless otherwise noted.