Monroe Family Therapy Center is a non-premium building released on April 8, 2015 along with the Level 51 update. Upon completion Marvin Monroe is unlocked.

Dr. Monroe's Family Therapy Center was a clinic owned by Dr. Marvin Monroe, who guaranteed to sort out family problems with his self-described "unorthodox" methods. The Simpson family went there for a brief treatment session (which included electroshock therapy) but as they failed to stop fighting physically, they got double their money back as Dr. Marvin Monroe's policy says. The Center's phone number was 1-800-555-HUGS, as seen in the TV ad where Homer first found out about the center. 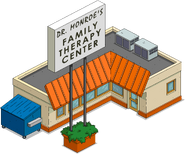 Add a photo to this gallery
Retrieved from "https://simpsonstappedout.fandom.com/wiki/Monroe_Family_Therapy_Center?oldid=242138"
Community content is available under CC-BY-SA unless otherwise noted.