Training Waiters and Waiting for Trains

The Monorail Cafe is a premium building released on September 10, 2015, during the Monorail 2015 Event, where it was a limited time building.

It was permanently added to the game with the release of the Dilapidated Rail Yard Expansion.

On September 28, 2017 it was offered as part of Magic Station Promo and player would receive additional 15 donuts back after the purchase. 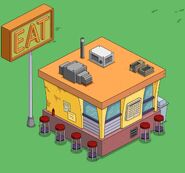 The Monorail Cafe placed in a player's town.
Add a photo to this gallery
Retrieved from "https://simpsonstappedout.fandom.com/wiki/Monorail_Cafe?oldid=227186"
Community content is available under CC-BY-SA unless otherwise noted.