This article is about the limited time event. For the permanent content update, see Dilapidated Rail Yard Expansion. 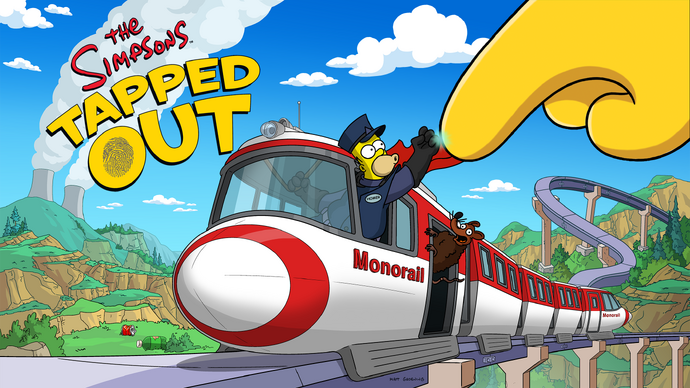 The Monorail 2015 Event is the sixteenth major event released to The Simpsons: Tapped Out. It was released to all players on August 11, 2015, three weeks after the release of the Springfield Heights Expansion. It ended on September 15, 2015.

The event was divided in three different Acts. The Acts were scheduled as following:

The Quest A Rail of One City drives the player through the first act of the event.

The event centered around constructing and operating the Springfield Monorail, and required, among other things, that Springfielders collect Junk, Metal, Plastic and Glass to be converted into Blueprints (Act 1), Duct Tape (Act 2) and Bells and Whistles (Act 3) at the Project Board in order to get personal prizes, and when they got all of them, extra track pieces.

Ahead of the Track[edit | edit source]

Like most previous major events, players are able to get bonus rounds once they have unlocked the last personal prize in the current prize track. This event shows a new rewards type. Instead of getting donuts as usual, the players are randomly rewarded with a Straight Track Piece (75%) or a Curved Track Piece (25%). To get the first two boxes, the players have to collect 3000 Blueprints (Act 1), Duct Tape (Act 2) or Bells and Whistles (Act 3). The third box is awarded for 4000 event's currencies, the fourth one for 5000, etc... Surplus currency when completing one does not carry over to the next. When the player has collected all the current act's personal prizes, the daily cap turned inactive and projects can be done without any restrictions.

During the event, players performed Friend Actions by dumping garbage onto their neighbors' buildings, in a manner similar to Vandalizing (normal harvesting was disabled.) Eligible buildings displayed an icon depicting a garbage-filled wheelbarrow. An affected building displayed animated "stink lines," and was cleaned by its owner by tapping on it. Besides the usual Friend Points, Cash and XP, dumping Junk rewarded 6 Blueprints, Duct Tape or Bells and Whistles for the first 90 friend actions, clearing it rewarded 1 for each building and showed the name of the friend who dumped the garbage.

Many quests are introduced during the event. See the table below for a detailed list. 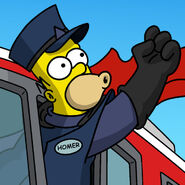 The guide for the event.

Add a photo to this gallery
Retrieved from "https://simpsonstappedout.fandom.com/wiki/Monorail_2015_Event?oldid=219772"
Community content is available under CC-BY-SA unless otherwise noted.