The Moe's Terror is a limited time alternative façade for Moe's Tavern released on October 20, 2015, during the Treehouse of Horror XXVI Event Act 2.

The Moe's Terror is a M'nthster-inspired façade for Moe's Tavern. Above the "Moe's" sign is a M'nthster sign with tentacles emerging from behind it and wrapping around the front of the building. The side wall has numerous posters of M'nthster and along the bottom are pictures of monsters that encircle the building, connected by a blue cloth. 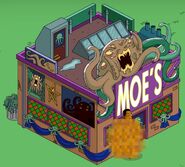 Carl Unwinding with wine.
Add a photo to this gallery
Retrieved from "https://simpsonstappedout.fandom.com/wiki/Moe%27s_Terror?oldid=238424"
Community content is available under CC-BY-SA unless otherwise noted.