Much Ado About Mindy

Mindy is a character in The Simpsons: Tapped Out. She was released in February 2014 with the Valentine's Day 2014 Event, and is unlocked upon completion of Madame Chao's.

Mindy Simmons was hired as an engineer at the nuclear power plant, due to pressure on Mr. Burns to have at least one female employee. Homer quickly developed a crush on her, due to many similarities they had, such as a fondness for beer, junk food, and TV. Mindy was very beautiful and was equally attracted to Homer. He went to great lengths to try to avoid her, but the two were selected to represent the nuclear power plant at the National Energy Convention in Capital City. Homer was tempted to enter into an affair with her (and felt compelled to by a fortune cookie which said that he was going to find a new love), but ended up deciding to stay faithful to Marge.

Mindy in the show 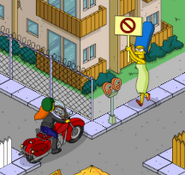 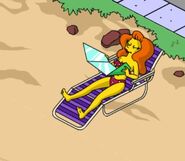 Mindy working on her tan.
Add a photo to this gallery
Retrieved from "https://simpsonstappedout.fandom.com/wiki/Mindy?oldid=256290"
Community content is available under CC-BY-SA unless otherwise noted.