The Simpsons: Tapped Out Wiki
Register
Don't have an account?
Sign In
Advertisement
in: Characters, Business Owners, Premium Characters,
and 9 more

A Flash of Two Nerds

Milo is a limited-time premium character that was released on July 5, 2016, during Issue 2 of the Superheroes 2016 Event. He is unlocked upon completion of Coolsville.

Milo is the owner of Coolsville Comics & Toys. He's the complete opposite of Comic Book Guy. 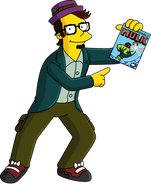