McBain is a premium costume available to purchase for Rainier Wolfcastle. The player can obtain the costume by building the Film Set for 120 donuts.

He was part of a deal with the Film Set during the Black Friday 2015 Promotion.

McBain is a former cop. He eventually stumbled upon evidence that implicated Senator Mendoza of running a drug cartel. He then ran his limo off the cliff, snapped the necks of three of his body guards and drove a bus to his front door. He was reprimanded by his boss, the captain of the precinct, and he tried to explain that he had very good reasons to do that, due to his running a cartel. However, he would not hear him out, and he then decided to kick him out of the squad. McBain then punched the captain out of the window in retaliation. 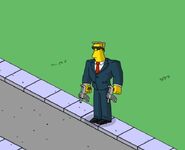 McBain going undercover.
Add a photo to this gallery
Retrieved from "https://simpsonstappedout.fandom.com/wiki/McBain?oldid=201369"
Community content is available under CC-BY-SA unless otherwise noted.