Matt Groening (Pronounced GRAY-ning) is a character released on November 5, 2014 during the Simpsorama Promotional. He is unlocked upon completion of the Writers Building.

Matt Groening is the creator of the television shows Futurama, Disenchantment, and the comic strip Life in Hell.

Matt seems to be very acclaimed, since when people saw him at a comic convention, everyone went for him for an autograph. Matt told them they can also take a bit of his 'stache, as they say it's good luck. However, when Homer saw a drawing of Bongo the Rabbit by Matt Groening (from his comic Life in Hell) he said Matt was a bad artist. He was once hired to draw a caricature of Freddy Quimby in a trial. When Kent Brockman presented a list of people who were gay, Groening was on the list. He is also in Comic Book Guy's banned list in the Android's Dungeon & Baseball Card Shop, along with Sideshow Bob, Nelson, Bart and Milhouse. When some "Everyman" comic books were being loaded in a truck, Matt Groening stole all of them and threw them into his truck. 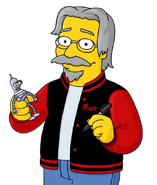 Matt Groening correcting the pronunciation of his name.

Matt Groening in the show.

Matt Groening in The Simpsons Game.
Add a photo to this gallery
Retrieved from "https://simpsonstappedout.fandom.com/wiki/Matt_Groening?oldid=238974"
Community content is available under CC-BY-SA unless otherwise noted.