Marvin Monroe is a non-premium character released with the Level 51 update. He is unlocked upon completion of the Monroe Family Therapy Center.

Dr. Marvin Monroe is a local psychiatrist who was for a long time considered to have passed away, until he had survived, revealed to have "been very sick".

** if the player has the Walk-in Therapy Stand

Marvin Monroe psychoanalyzing his own reflection 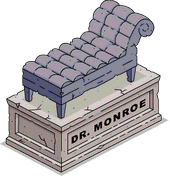 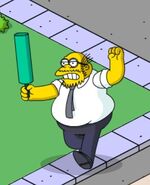 Marvin Monroe wielding a foam bat.
Add a photo to this gallery
Retrieved from "https://simpsonstappedout.fandom.com/wiki/Marvin_Monroe?oldid=252190"
Community content is available under CC-BY-SA unless otherwise noted.