The Mapple Store is a chain of retail stores owned and operated by Mapple. 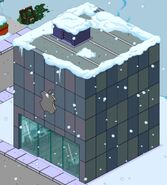 The Mapple Store as seen during its initial release during the Christmas Event 2012.

Mapple Store appeared in The Simpsons.
Add a photo to this gallery
Retrieved from "https://simpsonstappedout.fandom.com/wiki/Mapple_Store?oldid=236145"
Community content is available under CC-BY-SA unless otherwise noted.