4 hours (during event)
8 hours (after Event)

The Mall-O-Rail Station is a limited time building released on September 4, 2015, during the Monorail 2015 Event. It's the first prize to be won in the Event's Act Three. It comes with different extensions

It was released again, losing its limited time status, for the Dilapidated Rail Yard Expansion. It is a possible prize for players who did not obtain it during the initial event.

The more tracks the Player add to its monorail, the more Possums will be rewarded. See table to see the amount. 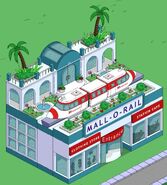 Add a photo to this gallery
Retrieved from "https://simpsonstappedout.fandom.com/wiki/Mall-O-Rail_Station?oldid=191965"
Community content is available under CC-BY-SA unless otherwise noted.